Deep appreciation is given to Bourbon for the information in this article. For even further reading about this topic, please go to the Sugar Glider Self Mutilator Site.

Self Mutilation in Gliders

A Self-mutilating (SM) Glider is any glider that chews on itself. Sugar gliders may or may not start to self mutilate if they are in pain or are seriously stressed. There are several different categories of SM gliders. The worst being the Cloacal Chewer. There are special instructions regarding them and their situation may be fatal. Injury SMs chew due to injury, this will include those that have just been neutered or had some other type of surgery. Sometimes the injuries can not be found right away or at all. Stress Chewers are those that chew due to boredom, loneliness, abuse, neglect by their owners and/or their environment or those that have been abandoned by a cage mate through death or other separation. 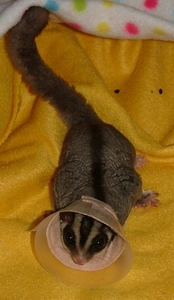 Gizmo started to Self Mutilate after he was neutered and had to wear an E-Collar to prevent him from reopening his incision. Fortunately, after 4 days in the E-Collar, he stopped attacking himself.

What to Do if You Suspect Your Glider is Self Mutilating

If you have a glider that is making "the noise" it will sound like a cross between a desperate cry and a crab, unlike any sound you have heard before. You will know it when you hear it. If they are going after their cloacal area AND are making the noise, you need to get them into an E-Collar as quickly as possible. If your glider has already done damage to itself, get it to a veterinarian as soon as possible! Then, fill out the questionnaire on the SM web-site and contact someone on the emergency contact list. This person will help you with feeding and sleeping arrangements. Keep a log of everything and anything that you try or discuss with your vet. Keep track of your glider's activity including times when they mutilate, how often they do, under what conditions, etc. Keep in mind that every owner has the right to decide how far they will go with their glider.

Because Self Mutilation is not very common, there have not been a mass of subjects to work with and this makes it difficult to diagnose and test. Case histories are important in helping to find a common ground as a starting point. To that end, the questionnaire should be filled out. The information gained will help in researching the possible causes of Self Mutilation so that the common ground can be found. To date, those common grounds are sadly not across the board. For example, one common ground that has been found is galvinized cages or bare metal within the cage. In this example, there are many gliders that have galvanized cages and have had for many years but have not been afflicted with Self Mutilation. So in essence, that common ground can not be determined to be a hard definite. Now could it be a contributing factor? Yes, it could. But the cause? Probably not.

Before taking your SM to a vet for medical treatment, please print a copy of this important story to take with you. There are no guarantees that it will work for your glider. However, it is what Dawn used for Petey. After two years of being an SM, Petey is now out of an E-Collar. He also had been neutered. We always try these meds first if all tests come up negative. If any test comes up positive, it needs to be treated ASAP.

If your SM dies, although it is a very traumatic experience for you, as the owner, it is very important to have a necropsy performed.  We still have owners that even after death, won't agree to a necropsy, this is very tough for all of us, and generally by the time a glider dies in this fashion, there isn't much left to test. They literally chew a hole in their stomachs and cloacal area, damaging far too big of an area to get good necropsies done. However, any results are better than none at all and can help in the research of Self Mutilation.

Diagnosis of a Self Mutilator

There are a number of tests that should be run on a Self Mutilator. Each test will help in determining a treatment plan for your glider and may also open a new door to help other gliders suffering from this disorder.

A lot of tests have been run on SMs and many times there have been negative results (meaning that nothing was found) and this has left us at a dead-end sometimes. However, the importance of running the tests can not be stressed enough so that anything that can be found will be.

There has been great support from the glider community.  The Emergency Vet Fund (EVF) has helped many, many SM owners with information in the areas of testing and living modifications to help those SMs that haven't done the damage, giving them a chance at a real life. Eric from Transoniq has created a special Wodent Wheel for gliders in E-Collars. We now have feeding stations and sleeping areas for them where the E-Collar is no longer an issue. These items can be purchased through the direct sources. Dawn has created a template for making an E-Collar that can be printed from your computer. Tom has dedicated a section on the Glider Health site just for information regarding SMs with contacts so that people don't feel so alone and can be told the truth about SMs. There is also an entire site dedicated to SMs, the Sugar Glider Self Mutilator Site has great articles and includes contact information and links to important resources.
Myths and Facts about Self Mutilation

Sadly, there is still much to be learned about SMs. All we can do at this time is plug along and hope that someday something works, not just with one or two SMs but with all of them. Unfortunately, we are dealing with a multitude of problems. Along the way, we have found some common Facts as well as some Myths...

Myth: It only happens to males.

Fact: It does affect both males and females; however, IF a female is gotten to a vet for diagnosis and treatment, they are fine.  Some of the common causes for females include: urinary tract infection, yeast infection in the cloacal area and bacterial infections or parasites (most commonly, Giardia).

Myth: It only happens to single gliders.

Fact: It also happens to gliders with cage mates.

Myth: It happens due to boredom.

Fact: There is nothing to support this. There is no common ground as to how much time is spent with the gliders.

Myth: It is diet related.

Fact: Again, there is nothing to support this. There is no common ground; however, we have found that many of the diets used are not healthy diets. But not all of the diets were unhealthy. There has been a wide variety in diets among SMs.

Myth: Use of Bitter Apple or Ban-Guard will help.

Fact: The usual topical sprays and ointments used for other animals will not work to keep a glider SM from chewing themselves. Do not use anything topically numbing without having an E-Collar intact. The glider's tongue will become numb and they may accidentally bite it off.
Common Grounds about Self Mutilation

Our research so far has yielded some common grounds abuot Self Mutilation. However, please remember that does NOT mean it will happen to all gliders with these common grounds (as explained above).

Causes of Self Mutilation

There are a few theories that we have thought about and definitely have not ruled out...

Theory 1: When a male's penis hang out while they are sexually maturing, many times they leave it out or it is out when they are playing around. When they exit the nest box or play on rough toys it may become irritated. Since gliders urinate on the side of their cage, if the cage is galvanized or has bare metal, the urine will cause a chemical reaction. In rubbing their cloaca on the side of the cage, it causes a burning sensation. They chew to get rid of the burning.

Theory 2: On humans, there is a flap that keeps males from urinating during an orgasm and vice versa. It is possible that gliders have this same flap. If that flap is defective or improperly developed, it may cause a back up or a blockage. This theory can not be explored without some very fine equipment since the flap would be smaller than pinhead size.

Theory 3: There may be a neurological defect or a mental illness involved.

Theory 5: In the case of hand-pulled joeys, it is possible that the mother's natural antibodies in the joeys diet are not availalble to help the joeys fight common problems.

Theory 6: In the case of rejected joeys, it is possible that a defect is present, which could be the cause for the rejection to begin with.

Daily Care of a Self Mutilator 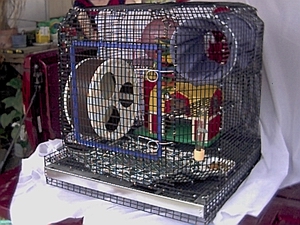 Cages need to be set up so that they are fairly low so that the glider wearing an E-Collar can not injure himself. If the cage can be made out of plastic/vinyl mesh with rounded corners, that would be best (as pictured above). To make a sleeping nest, you can make a tunnel out of a length of fleece and two 8" plastic embroidery hoops, then hang it from the top of the cage. This enables the glider to get in & out of the nest while wearing the E-Collar. You should also hang a hand towel or shelf hammock 3-4" above the floor so that the glider will have a soft landing if he falls. To make a feeding station, purchase bird feeders that have a trough. The trough will fit into the E-Collar so the glider can feed himself. You will have to provide a water bottle rather than a dish for easy drinking. Purchase the specialized Wodent Wheel from Transoniq so that the glider can run and get exercise in spite of the E-Collar.

All material, including photographs, protected by copyright © Suz' Sugar Gliders. Any material on this site may not be copied without express permission from Suzanne T. Enyedy.