Deep appreciation is given to Chris Hamann for sharing this information with us.

Periodontal Problems in Gliders
I have had 2 gliders who have suffered from periodontal problems. Sassy suffered from severe periodontal disease and over the course of 1 ½ years lost all but 3 of his teeth, and his son Nicky whose 2 front incisors are affected. Through caring for them from the onset of their troubles, I have learned much on the needs and care of a glider who is afflicted with gum disease.
Diagnosis
Your vet will be the one who will make the determination as to whether or not your glider is afflicted with gum disease, or if they are in danger of this problem. During your yearly physicals, you should have your vet check your gliders' teeth & gums to see that they are healthy, because the sooner that you can diagnosis this and treat it, the better your chances of your glider keeping their teeth. 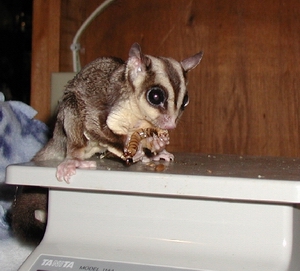 Sassy
Sassy was the first of my gliders to have gum disease, and unfortunately we did not catch it early in its onset. The first indication we had was when Sassy started sneezing one morning. I rushed him into the vet's office and he was put on an oral antibiotic. We realized after only a few days that this was not going to be enough as Sassy’s sneezing continued and did not abate. On a follow up visit, my vet checked his teeth and sure enough that was the root of the infection. Sassy’s gums had deteriorated to the point where surgery was necessary to remove the worst of the infected teeth. He had 9 removed at that time. Once his teeth were removed the sneezing stopped. We thought that everything was fine as Sassy recovered from his surgery, and was healthy for the next several months. But then he began to overgroom the tip of his tail. We later discovered that this overgrooming was directly related to the state of his teeth. When they would hurt, he would use his tail like a pacificier, or chew toy for a puppy, pulling it through his mouth to provide some relief to his aching gums.
We spent the next year fighting an ongoing battle with gum disease. Sassy became a regular visitor at the vet’s, as we would go in every 4-6 weeks, as needed. The sign was always the same, he would start overgrooming his tail. So we would take him in & he would open his mouth for the vet to check his teeth without any crabbing or fussing. Usually 1-2 teeth would fall out during the course of Sassy’s visit. Before leaving, Sassy would get an antibiotic injection & a shot of Torb for pain and would go back on his oral antibiotics at home. His gums would heal and he would be fine until the next tooth started up and the whole process started all over again.
When my Sassy passed away on July 8, 2004 he had only 3 out of 40 teeth left. Nicky
On Dec 23, 2004, we discovered that Sassy’s son Nicky was also suffering from periodontal disease. While Nicky suffers from the same problem, it has affected him differently than it did his father. Sassy’s problems were centered on his back, chewing teeth, while Nicky’s is confined to his 2 lower front incisors. Like his father, Nicky started out by sneezing. At the vet's office, we noticed that Nicky’s 2 front incisors were spreading apart from the swelling caused by the infection in his jaw. Nicky was put on a round of antibiotics to see if that would clear things up. It did, so the surgical removal of his teeth was not necessary, but Nicky still suffered from the effects of having gum disease. His lower incisors were permanently spread apart and were looser than they should be. Unlike Sassy, whose indicator was sucking on his tail, Nicky’s indicator that his teeth were acting up was quite different. Nicky would start to drop things. He would go to bite into a bug or piece of food and drop it out of his mouth. So I always knew that if he started dropping his bugs that it was time to go back in to the vet's. We have tried to take more preventive measures with Nicky though. He has a monthly checkup to get his teeth cleaned and I am instructed to use an antibacterial rinse with him daily. I also keep Baytril, an oral antibiotic, on hand as he uses it for 3-5 days after each vet visit to prevent infection after having his teeth cleaned and it is also given in a regular bi-weekly dose to prevent any infection from setting in. (This is prescribed by the vet and the dose was set by him. If you suspect any problems with your glider, please consult your veterinarian before giving any medication.)

After battling peridontal problems for over a year and a half, Nicky lost the fight. In early May, 2006 my vet pulled Nicky's 2 lower front incisors. It will be an adjustment for Nicky to learn to eat without relying on his teeth, but in the long run, it will probably be the best thing for him. Now he will no longer be getting food caught between his teeth to irritate his gums and cause infections.
He was given a shot of torb at the vet's office as well as a Baytril injection and was on oral medication for two weeks until he went back to the vet's office for a recheck to make sure that his gums were healing well. The day after having his lower incisors pulled, Nicky was doing well. He is having no difficulty eating whatsoever. The only effect that having his teeth removed has seemed to have on him is the inability for him to pick up his food with his mouth. He must now learn to use his hands to grab the choicer morsels that he wants to eat. (Inset photos show: 1) Nicky eating after his lower incisors were removed; and, 2) his lower incisors.)
Diet
You may need to make some dietary changes when dealing with a glider who is suffering from periodontal problems. With Sassy, since he had few teeth to chew with, I offered softer foods and more baby foods in addition to his BML. In addition, as it became difficult for him to bite open his superworms (his favorite bug to eat), wax worms (second favorite) or mealworms, I was forced to cut them open for him. This is a disgusting thing to do, but was necessary as bugs were one of the few things that Sassy would willingly eat when his teeth bothered him. One of the other things that he would eat willingly was peanut butter. I know that this is not the best thing to give a glider due to the high fat content, but it did become a part of Sassy’s diet. My vet was consulted on this matter and he agreed that if Sassy would eat it willingly it was better to encourage his appetite and hope that it would stimulate him to eat other things. I am in no way recommending that you include it in your gliders' diet as anything other than an occasional treat. I also found that it was better to cook foods until they were soft and mushy to make it easier for Sassy to eat.
I have not had to make as many changes to Nicky’s diet. Though I have switched from feeding him BML to the Ensure (Darcy's) diet since he will eat it more readily and I feel that if his immune system is in any way compromised by the ongoing problem with his teeth & the subsequent infections in his jaw that arise from it that it is more important than ever for him to be getting his vitamins & calcium in his diet. I have also switched from the superworms that he loves to mealworms which are easier for him to eat and don’t require as much biting with his front incisors. I’m sure that Nicky misses the big wormies that he adores, but the mealies are much easier on his teeth. Nicky has also become accustomed to having his vegetables cooked and to this day refuses to have his sweet potatoes or asparagus raw.
Daily Care
When a glider suffers from periodontal disease, it is important to assess the status of their teeth daily. With Sassy this was difficult as the problem lay with his back teeth. Thus a lot of his assessment was based on his behavior. With Nicky it is much easier.
Every evening Nicky will accompany me into the bathroom to have his teeth checked. I will wrap him in a piece of fleece (as described by Jen in her post on giving syringe medicine) and then I will hold him over the sink while I squirt a small amount of antiseptic rinse into his mouth. I do NOT put it toward the back of his mouth as I want him to shake & spit it out rather than swallowing it. I will also dip a Q-Tip into the antiseptic rinse and use it to brush his front incisors - both the outside and the inside to try to catch anything that the rinse missed. Then, twice a week, I will also give him his prescribed dose of medicine. Once he has had his nightly dental care, Nicky always gets a bug as a special treat for being a good boy. While he doesn’t enjoy taking his medicine or having his teeth brushed by any means, I think that he knows that I’m trying to help him because he never crabs or bites at me. The worst he will do is try to push me away or bury his head in the fleece so I cannot reach him.

Site most recently updated in April, 2021