Commonly called "mating wounds", in actuality, the type of wound pictured above is more accurately called a "dominance wound". Although oft-times these types of wounds are incurred during mating, many times, they are not. Both male and female gliders can be afflicted by dominance wounds. As the name implies, the wound is incurred when dominance by another glider is being established. Both mating and dominance wounds normally occur on the shoulder area of the glider. However, sometimes they will occur on the back of the head or the neck area.

Whether the wound occurs during mating or not, treatment is the same. When a dominance wound is discovered, no matter how small or large,  veterinary care is necessary. Until you can get your glider to your veterinarian, the following steps should be taken:

*Sterile Saline Solution is available in syringes from The Glider Initiative

This large mating wound had been sutured for primary intention healing
and the glider removed the sutures while grooming it with her hind leg.
This picture was taken two weeks after the original wound had been inflicted.
Regardless of whether sutures are used or not, both topical and oral antibiotics should be prescribed for your glider. The topical antibiotic most commonly prescribed for this type of wound is Silver Sulfadiazine Cream (a.k.a. SSD Cream). The oral antibiotic will vary depending on the preference of your veterinarian. It is important to give your glider the full course of antibiotics, whether the wound appears to be healed or not.
Dominance wounds will appear to be healed externally before they are actually healed internally.Therefore, it is necessary to keep the wounded glider separated from its cage mate(s) until the fur starts to grow back over the wounded area. Unfortunately, this process can sometimes take 2-3 months before the fur starts to grow back in. Placing your gliders back together too soon will result in the other glider attempting to groom the wound - actually making the wound open back up, prolonging the healing process.

This wound was inflicted by a neutered male glider upon an Alpha female.
The first picture shows the fresh wound. The second picture shows the same
wound two weeks later with secondary intention healing.
Although the gliders need to be kept separated, you CAN allow them to have supervised playtime together each day. Make sure that the other glider(s) do not attempt to groom the wound. If you observe them getting near the wound, gently move them away from the wound. Allowing them to have playtime together will keep them familiar with each other so that you do not have to reintroduce them to each other once the wound has completely healed.
Of course, sometimes the gliders can not be put back together at all if dominance was a major issue between them. Trying to have two Alpha-personality gliders together can cause continued problems to occur between them. Use common sense when determining whether your gliders can truly continue to be cage mates. 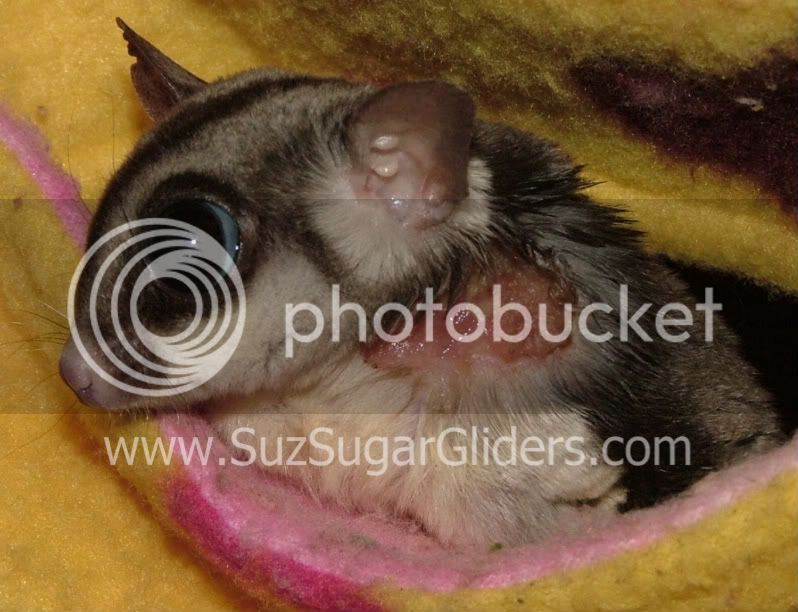 This wound was inflicted by an Alpha male in a colony with three females. The wound had been inflicted soon after feeding the colony in the evening. In all likelihood, the wound was caused by food aggression.

If you feel your glider is sick, please seek immediate veterinary

assistance. The information on this page and in the correlating

articles is for general educational purposes and is not intended

to replace proper vet care. Please do not try to self-diagnose or